An international webinar on "Permafrost Research: Opportunities and Scope in India" was held on 25th September 2021, organized by the Department of Geology, NEHU in association with Permafrost Young Researchers Network (PYRN) an International organisation established under the patronage of the International Permafrost Association (IPA) at 16:00 hrs onwards. The webinar started with the welcome address by Prof. Devesh Walia, HoD, Geology Department, NEHU where he spoke about the importance of research in the field of Permafrost with special reference to the Permafrost regions in the Himalayas. Permafrost is ground that continuously remains below 0 °C (32 °F) for two or more years. Permafrost frequently contains large amounts of biomass and decomposed biomass that has been stored as methane and carbon dioxide in the permafrost, making the tundra soil a carbon sink. As global warming heats the ecosystem and causing soil thawing, the permafrost carbon cycle accelerates and releases much of these soil-contained greenhouse gases into the atmosphere, creating a feedback cycle that increases climate change. The adverse effect of climate change on the Permafrost is one of the most important fields of research in the current situation, he said while addressing the gathering. Prof. Walia also informed about the newly established Department of Geology in NEHU and that this new department will collaborate with institutes and organizations around the world to promote research in the field of Geosciences.

Mr. Adam Kirkwood, Vice President of the PYRN Executive Committee, who introduced the PYRN and its activities, the International Researchers group which focusses on the Permafrost research all over the world. He briefly spoke about all the programmes and projects running under PYRN as well as how quickly the PYRN organisation has grown, and has more than 1500 members from India alone.

The Keynote address was delivered by Dr. Rasik Ravindra, Former Director, National Centre for Polar and Ocean Research, Goa. In his address he introduced Permafrost including the distribution of Permafrost in the world as well as in the Himalayan region, Impact of climate change on Permafrost and how the thawing of the Permafrost has adverse effects on the population of settlement areas. Further he emphasised that it is not well studies in Indian region and creates many surprises while working in Himalayas, He discussed in detail about the importance of Permafrost research and that it’s important that more people work on this field with the aim to protect, conserve and have better knowledge of the Permafrost. 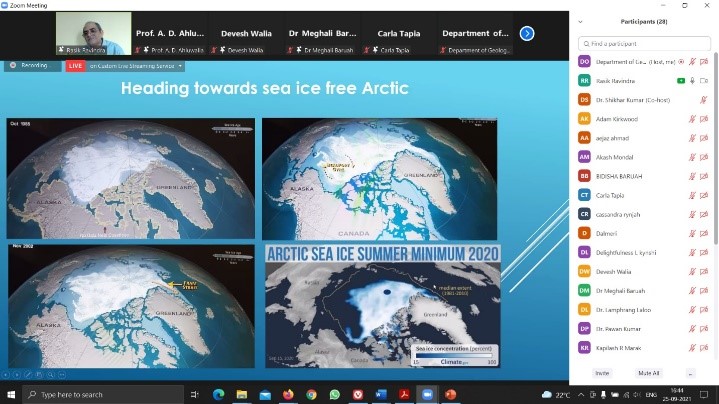 Prof. A.D. Ahluwalia, Former Head of Centre of Advanced Studies in Geology, Punjab University, Chandigarh gave his lecture on the topic Himalayan Eco & Geotourism across borders: a panacea for affluence and peace in South Asia. In his lecture, he emphasized that the knowledge about the Permafrost can be spread by focussing on the enhanced Tourism in Permafrost areas of the world especially in the Himalayan Region. Tourism can be used to better educate the people and thus helping in the publicity of the problems which needs to be addressed. The understanding of the permafrost areas may also help averting disaster in the mountainous areas.

The lecture on Tunnel Deformation, its geological condition and support systems in the Himalayan Region was delivered by Dr. Aejaz Ahmad, Deputy General Manager, Geology & Geotech in Intercontinental Consultants and Technocrats, New Delhi. He gave an overview of the difficulties faced by the geotechnical engineers working in Permafrost regions of the Himalayas while constructing tunnels. He spoke in details about the special techniques and mechanism used to do tunnelling in Himalayan regions. He shared the experiences while constructing one of the longest and highest tunnel in the Jammu and Kashmir region.

A Special lecture was delivered by Dr. Carla Tapia Baldis from the IANIGLA – CONICET, Argentina, permafrost typically forms in any climate where the mean annual air temperature is lower than the freezing point of water. She discussed about the Ground Ice Estimations in the Southern Andes. In her lecture she described the techniques for Estimating the Ground ice cover of the southern parts of Andes mountains using satellite imageries and GIS techniques.

The webinar concluded with the Vote of thanks delivered by Dr. Pawan Kumar from the Department of Geography, Delhi School of Economics, University of Delhi, followed by distribution of certificate. 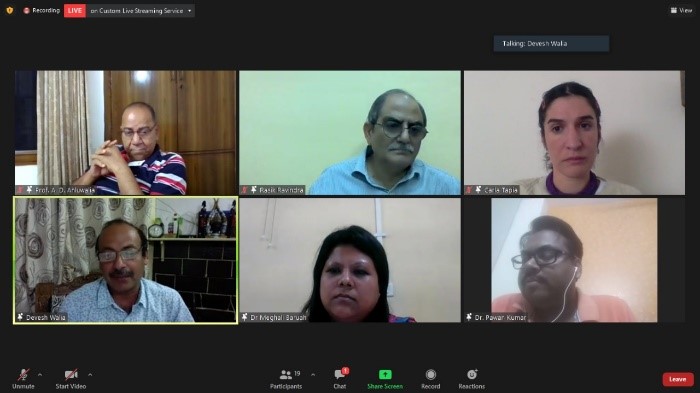