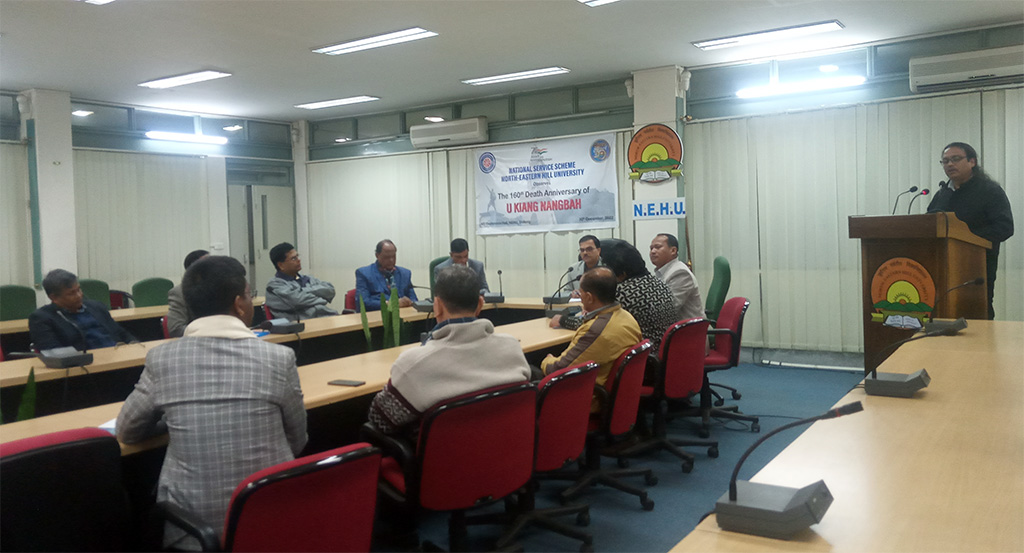 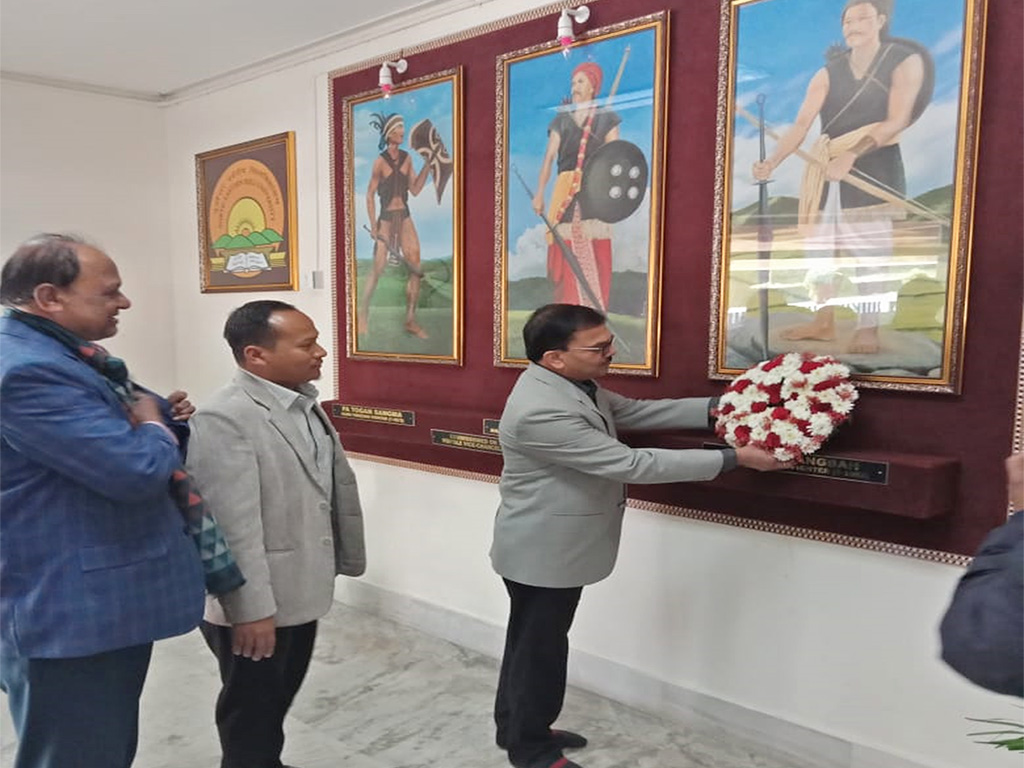 The North-Eastern Hill University today organized a tribute program in the occasion of the 160th Death Anniversary of the freedom fighter U Kiangbah Nangbah. The event was organized by the NSS Cell of NEHU which is headed by Dr. Marbha M Khymdeit.

The event started with the singing of National anthem and laying of the wreath on the portrait of U Kiang Nangbah which adorns the entrance of the Vice-Chancellor’s Office. Prof. Shobhan N. Lamare from Department of History and a noted historian presented a talk on the lives and struggle of U Kiang Nangbah in resisting the Raj. He stated that a lot is not known about the life of this great freedom fighter because of the amount of work done lacks the amount information as the most the knowledge about the life of U Kiang Nangbah is in oral form passed on from one generation to the next.  In his talk Prof Lamare also mentioned that “Kiang Nangbah understood very early on that the might of the British Empire was not fully comprehended by the people of his community during those initial years of the freedom struggle, mainly because of their ignorance of the affairs of the world at large. Nangbah rightly felt that the foreigners had no right to disrupt their ways of living, and prevent them from performing their cultural and religious obligations as had been practised so far. He therefore chose to revolt against the British occupiers who had very little or almost no regard for the religion, customs and traditions of the Jaintias and their way of life.”

Prof. Prabha Shankar Shukla, the Vice-Chancellor in his remark thanked Prof. Lamare on sharing the knowledge about U Kiang Nanbah with all present. It was from the local oral tradition that we know that his mother’s name was ka Rimai Nangbah, the only record that we have about his father is again from the British record which Dr. Shoban Lamare, who is a Professor in the Department of History in our very own University has salvaged from the archive and published in his book. U Phet His father’s name was mentioned in the information recorded when U Kiang was arrested and that too only his name and not his clan’s name was recorded by British so we don’t really have the full identity of u Kiang Nangbah’s father too.

He exhorted that “the ignorance about U Kiang Nangbah is a reflection on the Government’s education policy, which has totally neglected the history of the North-East. But now, with the introduction of New Education Policy, the youth of the nation will actually get to see and learn about these freedom fighters. Nevertheless, this sensitisation has to begin from the school level itself, and that can be made possible only by incorporating the history, culture and traditions of the North-East in social studies textbooks taught across the country.”

Prof. Shukla concluded by stating “It is the work of historians like Prof. Shobhan Lamare that we hope will contribute to re write the history books so that the young generations of our state and nation will know more about these freedom fighters who gave away the beds of feathers and sacrificed their lives for us. We should all be thankful to Prof. Lamare for his work and hope that many more historians come up with their work on the freedom fighters of the state of Meghalaya.”