This was done in compliance with the Ministry of Human Resource Development (MHRD)’s guidelines for schools and colleges to celebrate International Women's Day on March 8. The theme for this year is 'I am Generation Equality: Realizing Women's Rights'. Since Women's Day this year falls on a Sunday, these activities could be observed on any day between March 1 and March 7. 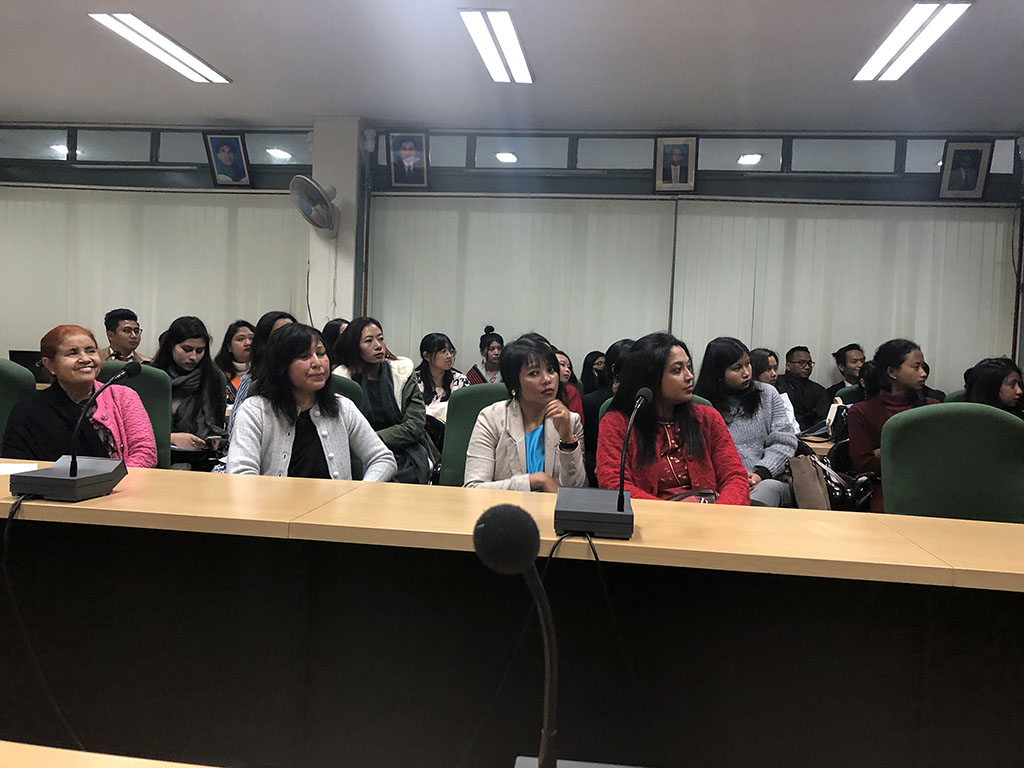 This was done in compliance with the Ministry of Human Resource Development (MHRD)’s guidelines for schools and colleges to celebrate International Women's Day on March 8. The theme for this year is 'I am Generation Equality: Realizing Women's Rights'. Since Women's Day this year falls on a Sunday, these activities could be observed on any day between March 1 and March 7.

Organised under the chairmanship of Prof. Streamlet Dkhar, Dean, School of Humanities, the function was also attended by Prof. Monika Agarwal, Director, NIFT, Shillong who was the guest of honour on the occasion among others.

In her speech, Dr. Lyngdoh, who also currently serves as the Chairperson of the Assembly Committee for Empowerment of Women, and as a Secretary of the All India Congress Committee in charge of the state of Mizoram shared her experience of being the sole female M.L.A in the sixty member Meghalaya Legislative Assembly between 2008-2013. She also expressed hope that more women take up politics.

She exhorted women to stand up for each other in the fight for gender equality in the state and nation. “It’s one thing to celebrate the International Women’s Day but it’s another thing to be responsible for other women, how one woman can help another.” She suggested a tag-team kind of responsibility which could yield better results with all these celebrations.

Dr. Lyngdoh recalled a few things that are highlighted for the special day. Firstly, to champion women for the usage of technology and innovation. “We have to ensure that we teach a mother the usage of all technologies to help that mother or that person have a better life,” she said while promising to see what she could do to ensure that women in her constituency get some sort of an assistance with the intervention of technology to help them have a better life.

“The second thing that that day says is that we should forge for an inclusive work place. So if every women can help another woman in a workplace be safer, equal, I think it would be good. So we need to look at what we could do there,” she added.

“The third thing is to support women earn on their own terms. Women need to get into the situation where they work on their own terms. Roles need to merge. From 1911 when the day began till today we have seen the changes, progress, the paradigm shift from the concept of women and why women have to fight for their rights,” she observed.

Another interesting thing about the theme that interested Dr. Lyngdoh is the empowerment of women through health education. Recalling her ground zero experience throughout her political career, Dr. Lyngdoh observed that women suffer greatly because they have no access to health education. “Institutional deliveries of women in Meghalaya is still a main concern of the state government,” she said. “As women we need to start listing some of the important agendas that need to be put in place if we are really celebrating International Women’s Day in the true spirit. Women sitting in this room you are the future of the state, of your own state. We need to give you the enthusiasm, we need to motivate you and not to be embarrassed to be talking about women’s rights’” she added.  “Continue to rally for women’s rights.  I believe that India has an agenda to protect the rights of women, I believe that opportunities have been placed in several policies so that women’s rights are protected,” she added. “But it is for us the community across India to ensure that we translate those policies to real life situations. It is important for us to bring the policies to ground zero, to ensure that these rights are understood, properly channelized and are also correctly presented before government agencies international agencies.”

Coming to NEHU’s role, Dr. Lyngdoh hoped that the University would continue to take forward the women agenda and women issues. “We still need a lot of attention paid to disparity of women, disparity of gender and the atrocities against women,” she said. She hoped that the University would take those researches to the correct channels and share the findings especially when it comes to the institutionalization of women’s right agendas so that “we can be comfortable and be rest assured that the constant portraying of the disparity of gender in so many areas in our community begins to get addressed and be heard.”

In her speech, Prof. Monika Agarwal, Director, NIFT, Shillong called for the empowerment of not just women but every human being in order to build a strong nation. She said that women empowerment means respecting one another. She advocated the three L’s – Learning, Labour and Leadership. She said that we need to educate people, then employ them and finally make leaders out of them.

One of the guest speakers at the function, Mrs. Phikaralin Wanshong (or Kong Kara as she is lovingly known), an entrepreneur who specializes in food processing spoke about her work which has been widely acknowledged by the Ministry of Micro, Small and Medium Enterprise which awarded her with the Best Entrepreneur Award in 2010. The award was conferred to her by the then President of India Smt. Pratibha Devi Singh Patel in New Delhi. Kong Kara’s dedication, hard work and growing technical expertise through all the training allowed her to set up her own processing unit - Kara’s Fresh Foods

In 2015, Kong Kara registered herself as a partner with Enterprise Facilitation Centre (EFC), in Mylliem village, East Khasi Hills.

Kong Kara, a mother of four believed that knowledge and skill should be passed on to others. Till date she has trained 700 men and women. Her latest venture is the bakery sector which has enabled her to provide employment to others.

Prof. B. B. Gupta, NEHU Vice-Chancellor in-charge, informed that the University is doing everything for gender equality. There is zero tolerance to any discrimination anywhere, he added. He assured the girl students to be secure in the campus and not to see themselves lesser than boys.

Dr. Debashish Chowdhury, Registrar in-charge and Controller of Examinations lamented the hypocrisy in society and called for introspection to see where we have gone wrong. Most of the achievements made by women in the country is because of their own individuality and extraordinary talents, he observed.

The programme which saw two musical performances by Ching and group from the Department of Linguistics, NEHU finally came to a close with a vote of thanks by Ms. Baphimon Rynjah, Joint Registrar, NEHU.