Dr. Preeti Gupta holds a Bachelor of Science (Hons.) degree in Chemistry and LL.B. She also holds Master's degree in Science as well as Law. She completed her LL.M from Indian Law Institute New Delhi in 2007 with specialisation in Criminal Law and Judicial Administration. She is one of the first doctorate holders from School of Law IGNOU who was awarded the Research and Teaching Assistantship scheme leading to Ph.D. She has completed her Ph.D under the guidance of Professor Srikrishna Deva Rao, Vice Chancellor National Law University, Orissa on the topic 'Transplantation of Human Organs - Jural Norms and Judicial enforcement'. She cleared her UGC-NET Examination in 2008 and was also awarded Junior Research Fellowship.

Dr. Preeti Gupta joined the Department of Law NEHU in 2010 as Assistant Professor. Since then she has been actively involved in teaching various subjects like Law of Contract, Public Health Law, Socio-economic offences, Law and medicine, Legal English, International Environmental Law, Law of Torts, Legislative Drafting etc. to undergraduate students and certain topics in Criminology and Research Methodology to LL.M students of the department. Her areas of specialisation are Law and medicine, research methodology, women studies, environmental studies, bioethics, law of torts & judicial administration. Keenly interested in focussing on inter-disciplinary research in law and has tried to assimilate topics on gerontology and law in a couple of her publications. She has attended and presented papers in National and International conferences. She is a Life member of Indian Association for Women's Studies, New Delhi and Indian Science Congress Association, Kolkata. Apart from academic achievements, she has been an NCC 'B' certificate holder and has won numerous awards in quiz, debate and essay competitions at the school and University level. She has been actively involved in activities like trekking, camping and mountaineering activities from various organizations. 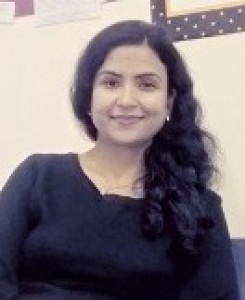